For the 861 student applicants who got good news about their admission to Duke University Wednesday night, the acceptance notice was just the beginning of the welcome they received.

For the Devil’s Advocates, a Duke student social media team working with the Office of News and Communications, the notices were a highlight of weeks of work to create social media graphics and digital swag and to electronically greet the students.

Here’s a replay of how last night played out:

The Advocates oversee @DukeStudents accounts on Facebook, Twitter, Instagram, tumblr, and Snapchat. When the Early Decision notices went live online at 7 p.m. Wednesday, the team was ready with personal greetings to the first acceptances of the Class of 2021.

Most of the greetings carried best wishes, but there was some early advice as well:

“When you arrive, make sure to talk to those around you; their life stories may be eerily similar or wildly different, and each person you come across will have something valuable to teach you. Keep your ears and heart open, and you’ll learn just as much from them as you will in class.” Jair Oballe, Class of 2019

The Advocates helped the Class of 2021 celebrate their news with a Spotify “Happy Dance” playlist around the theme of admitted students being “The One,” a playlist that had no problem fitting in Orleans and Olivia Newton-John as well as more contemporary singers.

Leading up to 7 p.m., current Duke students shared words of encouragement and their own memories: 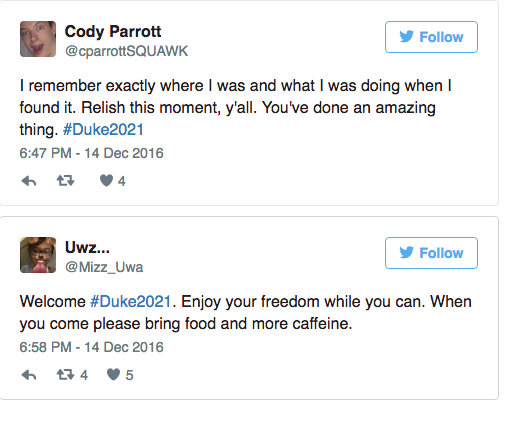 When the admissions notices went live online at 7 p.m., Twitter was immediately filled with admitted students sharing their good news and posting photographs of their letter of admission (with their addresses blacked out). The first admitted student to tweet with the hashtag #Duke2021 was Michael Castro.

THE REST OF THE EVENING

Soon after the Class of 2021 started the celebration, parents, siblings and Dukies joined in:

Dean of Undergraduate Admissions Christoph Guttentag tweeted: “Loving these #duke2021 tweets. Congrats to the first Blue Devils of 2017!” At one point, #Duke2021 was trending on Twitter in Durham.

To wrap the celebration up, the Devil’s Advocates ended the evening with this tweet: 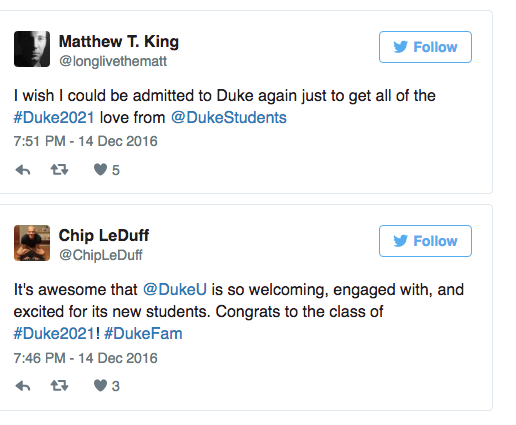 This was originally published on Duke Today.

Keeping up with ‘the kids’ is exhausting.

It seems like every year there’s a new trend or social media platform that affects the way we reach students online. Luckily for us, we’ve got a secret weapon in the never-ending fight to stay hip: Nearly 45 student ambassadors who represent us across social media (including Chinese social media channels). Especially considering our university’s small size, it’s a huge team. Here’s what we’ve learned from them this year: 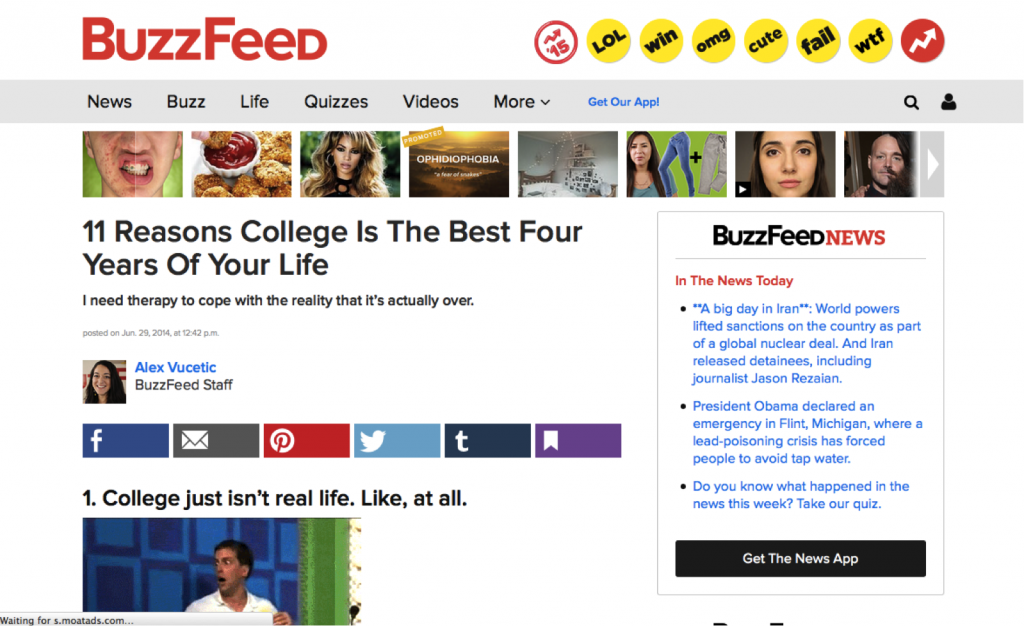 The pressure to make the most of the “the best four years of their lives” has always been a thing for college students past and present. Because social media never sleeps, however, ‘fear of missing out (FOMO)’ is at an all time high in 2016. From the moment they wake up in the morning, students are constantly plugged in to the people, places and things that are important to them on social media.

The takeaway for social media managers: Experiment with posting easily digestible content at different times of the day, possibly during high traffic periods when students are likely to be on the bus or taking a break between classes. For content that requires more of a captive audience (e.g. videos, long-form articles), try posting after 8 p.m. when students are more likely to be on their desktops instead of their mobile devices. 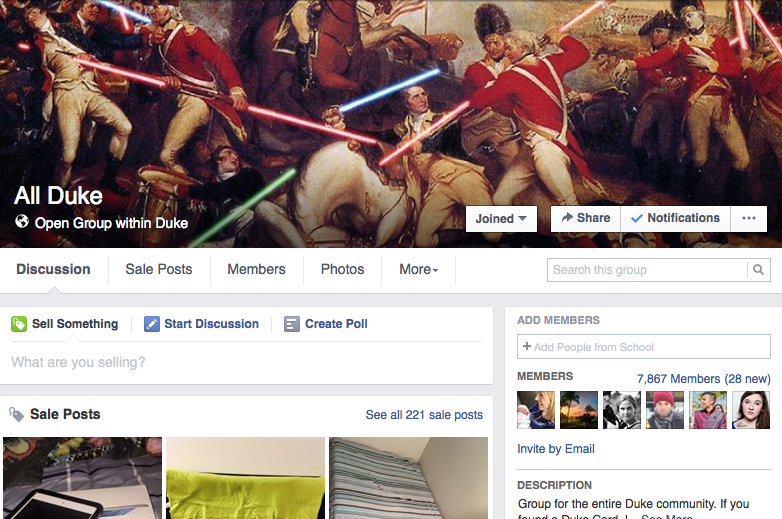 They may not admit it, but Facebook is still an important part of their lives. Sure, it may be the family dinner party they can never leave but, as one student told us, “Facebook serves as the baseline for all the other social media platforms.” While Snapchat and Instagram are spaces where they get the stuff they want, but Facebook is a space where they get the stuff they need: Event information, trending conversations on campus, contact info for students they don’t know directly, … In short, it’s their Yellow Pages.

Twitter, on the other hand, is (directly quoting from a student here) “just lame.” Graduate students find value in it for professional development purposes but, for undergrads, it doesn’t serve a purpose that isn’t already fulfilled on their other channels.

The takeaway for social media managers: Thanks to the almighty Facebook algorithm, organic reach for brand pages is declining. If you want to reach students on Facebook, instead of working to attract more followers to your brand page, try posting your content in event pages, private groups and public, campus-wide groups. Try having a student ambassador or intern post on your behalf, so that it comes from a student voice.

The Days of Fliers IRL (In Real Life) Are Over

If you haven’t before, check out the events tab of your Facebook profile. There, in one place, is everything you need to know about the things happening in your area, events you may be interested in and events your friends are attending (because nobody wants to go alone). For this reason, students say Facebook is the best place to promote an event. Paper fliers, on the other hand, aren’t nearly as effective.

The takeaway for social media managers: Having an event page on Facebook, and making sure it includes as much relevant information as possible, is essential if you want to promote an event. After you’ve created it, have students share with their networks and invite their friends.

On Snapchat, Continuity Is A Major 🔑🔑🔑 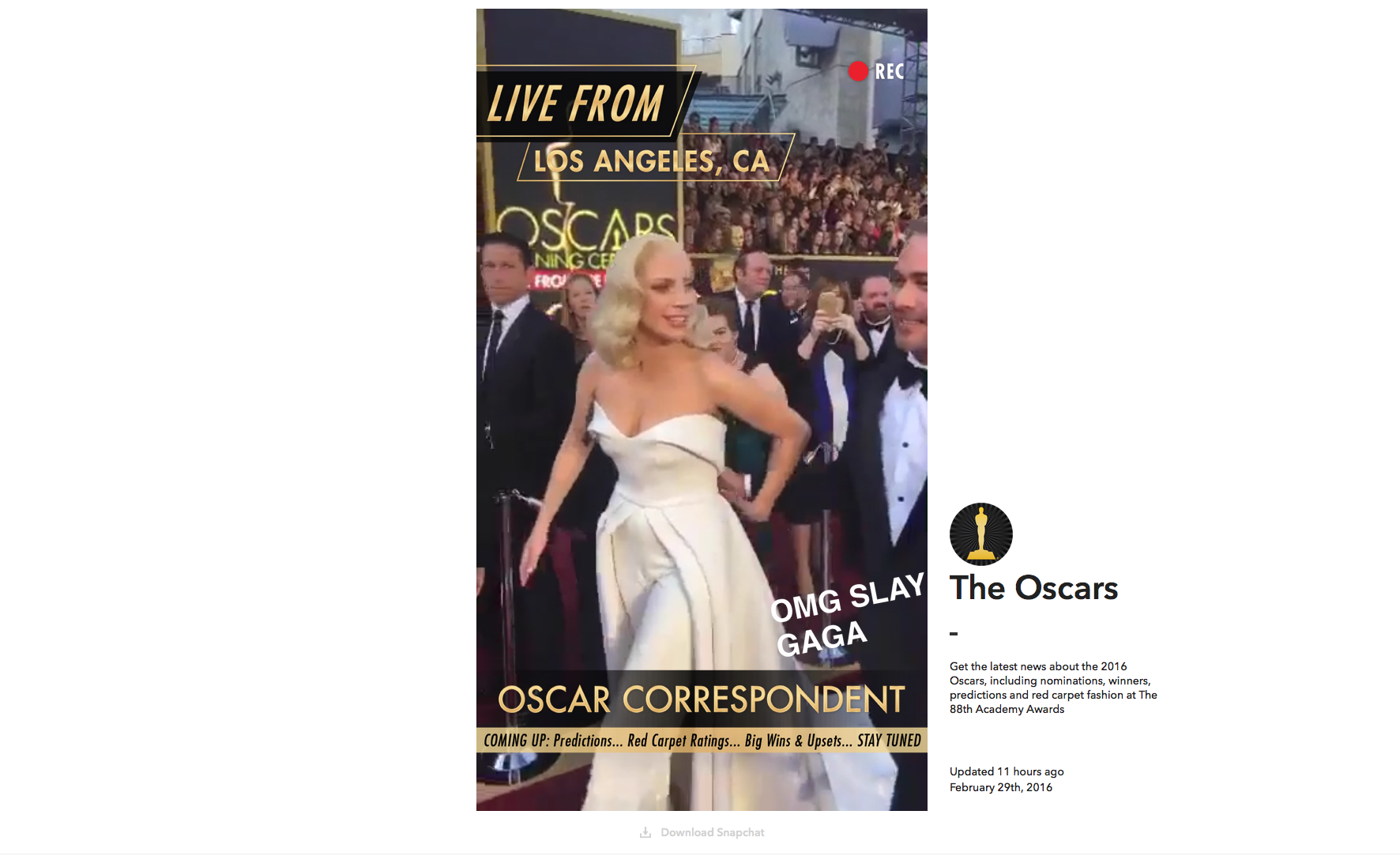 For students, one of the appeals of Snapchat is that users don’t have to be fed content they don’t want to see. Whereas other social media platforms require users to scroll through a newsfeed, users on Snapchat consciously choose which story they want to see. For that reason, students say they want to know what to expect when they tap on your Snapchat story, so continuity is key to retaining viewership.

The takeaway for social media managers: If you manage a Snapchat account, try to be consistent with your content. Compose a distinct beginning, middle and end to your story so that viewers can easily follow along.

By Elysia Pan and Cara Rousseau

On December 11, 2015, Duke welcomed 811 Early Decision students to the Class of 2020. Along with their acceptance letter, the admitted students and their families were given the gift of Duke digital swag – a collection of Duke images displaying the hashtag #Duke2020 and #DukeFamily for mobile and desktop backgrounds, social media sharing and posting in online spaces. 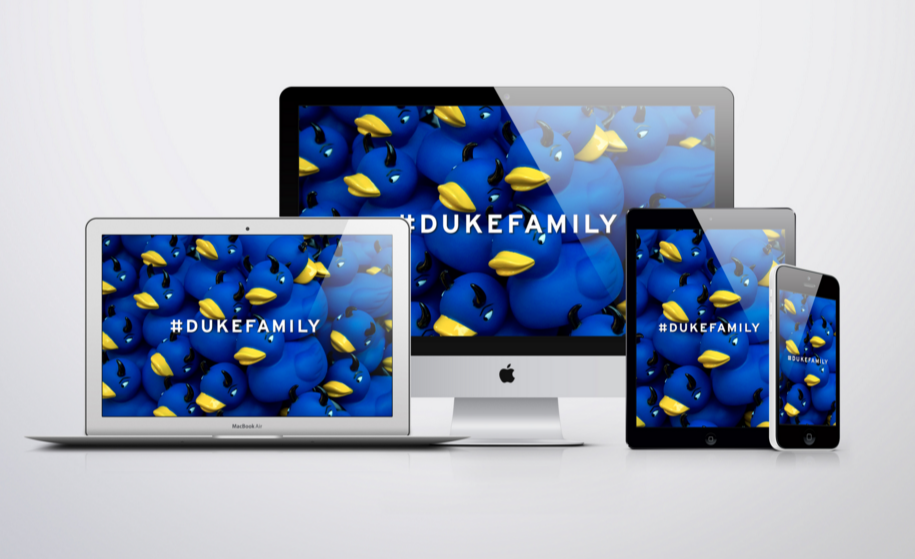 Under guidance from Duke’s Office of Undergraduate Admissions and the Office of News & Communications, the project was executed by DiDA, a Duke student-led, full-service marketing agency. Four students were involved in creating/updating the site and creating themes that would appeal to admitted students and their families. 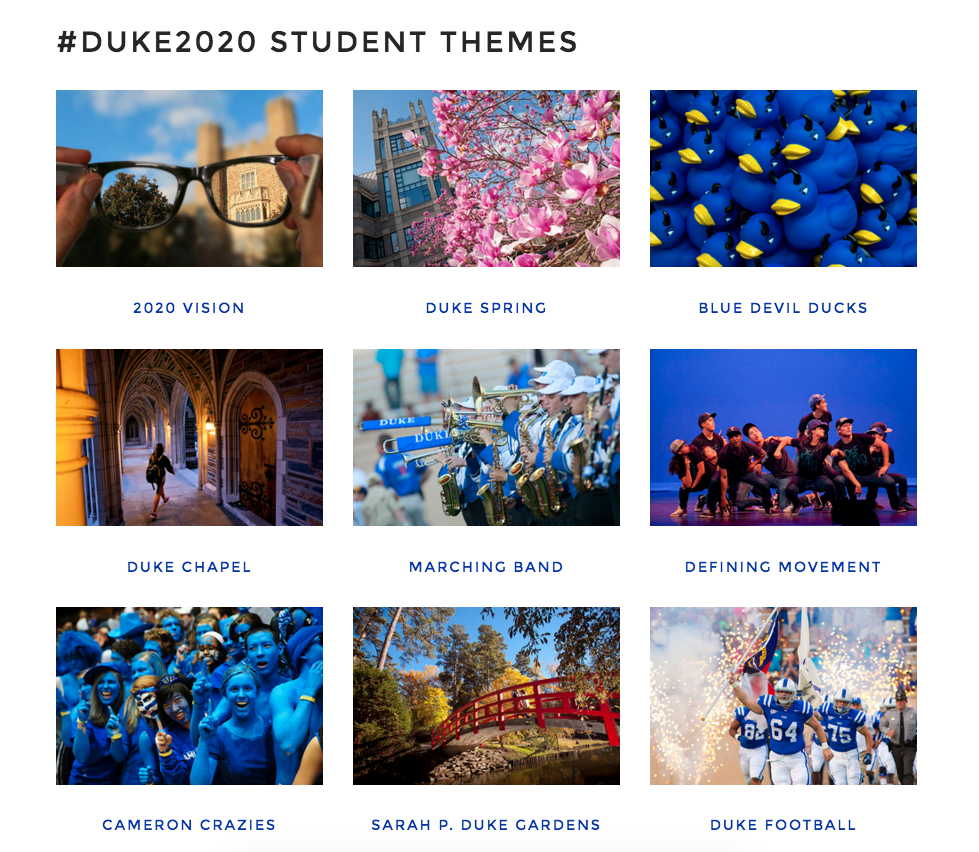 By creating the digital swag, we fostered an intimate online community for the incoming class as soon as admits received their acceptance letters. Students and their family members were able to use these graphics as a digital marker that they joined the Duke community (think “online bumpersticker”).

Our approach was to showcase Duke in the best way possible: by creating connections between current and prospective students so that they end up recruiting each other. This project was a way for admitted students to interact with current undergraduates, and vice-versa.

We always want to show off the talents that our undergraduates possess! We also were able to show design/media-savvy students that there is a community here on campus for them.

We learned a few things that can be applied to other digital media projects in higher education:

When you’re working with student teams, it’s important to think ahead on projects that will need to be updated in coming years, as students graduate and study abroad. We created a generic Gmail account for the Squarespace site we built and we saved the graphics on a shared box.com space. This way, we were able to work with a new graphic designer the next year and he was able to access the website and all of the files he needed.

We created a heat map of the images that were downloaded and learned images showing people typically performed the weakest. The most popular downloads were Duke spring, #ForeverDuke buttons and Duke ducks.

We’ve seen that people shots are effective on social media when the audience can identify people who they know in the shot. For admitted students and their families, they probably didn’t identify with photos of current Blue Devils. But, they were eager to share pictures of iconic Duke places and things.

By creating the suite of #DukeFamily graphics, we made the site appealing to people beyond the incoming class. Alumni, staff and faculty were excited to be able to show their Duke pride on their devices and social media profiles, too. 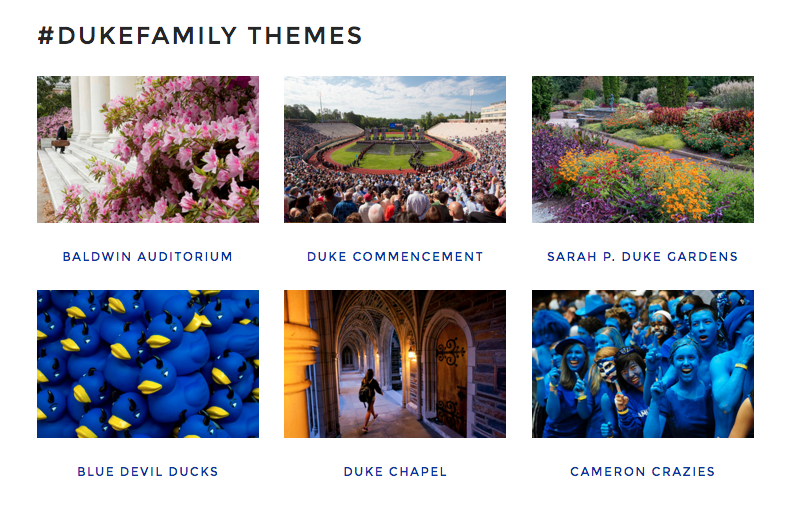 Now, go swap out your cover art and show your Duke spirit!

The project was led by Duke’s Office of News & Communications and the Office of Undergraduate Admissions, and was implemented by the student-led Duke Innovation Design Agency (DiDA).

Elysia Pan is a Duke alumna and works as an admissions officer in Duke’s Office of Undergraduate Admissions, where she focuses on yield activities, recruiting in the arts & humanities and manages in-house design.