There is no place like Duke during the autumn months. Fall is already one of my favorite seasons, but something about fall on Duke’s campus is just breathtaking. Every year, Duke’s social media pages launch a #DukeFall campaign where Dukies everywhere are flooded with vibrant photos of the seasonal changes happening on campus, on their timelines and Instagram feeds. During my first two years at Duke, I never really paid much attention to the fall leaves changing. It always seemed to happen in the blink of an eye. Yes, Duke University is a gorgeous campus, but leaf watching was not on my radar. However, this year I wanted to capture this beautiful and colorful time of the year in a unique way. So I decided to create a time lapse of the leaves changing colors on a single tree on West Campus.

When I envisioned this project in its final form, I knew I wanted it to look like the tree was changing colors over the course of one day.  So I first found my subject, a sprawling oak tree that stands in the shadow of the magnificent Duke Chapel.  When it was time to film, I set up my camera in roughly the same spot, at about the same time each day.  For this particular time lapse, I positioned my camera at the center of Abele Quad.  In that spot, my tree takes center stage with the chapel in the background.  Then the waiting game began for this beautiful oak to turn vibrant orange.  In the beginning, the process was kind of like watching paint dry. It was slow and not very eventful.  But by week three, a glimmer of hope, as a tiny patch of orange peeked through the green canopy.  Signs of fall at last! 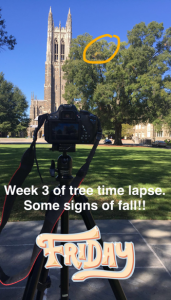 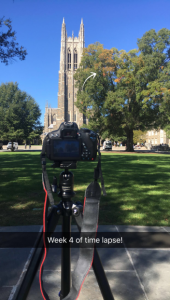 For 8 weeks, this tree project really captured my attention. For the first two, I relied on calendar alerts to remind me that it was time to go out and film.  Every Friday at noon, I would set up my tripod and record for about 30 minutes, to ensure that I collected enough footage of people passing by once the film was sped up. Then by the third week, it became part of my routine.  Eventually my whole family was consumed by the changing of the tree.  At one point during this process, my parents would call to check up on me and the changing tree!  I will say, this project was quite the conversation starter. I met a lot of wonderful people while standing on the quad waiting for the leaves to change color.  People would come up  and ask “What are you filming?”  I replied, “I’m filming that tree as the leaves change colors.”  The spectators were a little bit surprised but also very intrigued.  After weeks of waiting, my coveted tree was finally filled with beautiful orange leaves in all its fall splendor.

When I started the project, I must admit I was a little nervous about how the video would turn out.  Prior to this video, I hadn’t made a time lapse of this magnitude. After I gathered all the footage I needed, I found myself becoming a bit emotional and enlightened.  After 8 weeks of filming, I came to realize some very important things:  First, I’m so lucky to attend a university like Duke. Secondly, patience really is a virtue. And finally, there’s beauty in everything if you just take the time to find it!  Recording this tree was an eye-opening experience for me.  It allowed me to take a step back and observe. As students, we tend to forget that there’s more to campus life than just classes, parties, and grades. Watching this simple oak tree assume it’s fall glory, revealed to me that every moment of our college experience is precious and shouldn’t be taken for granted.